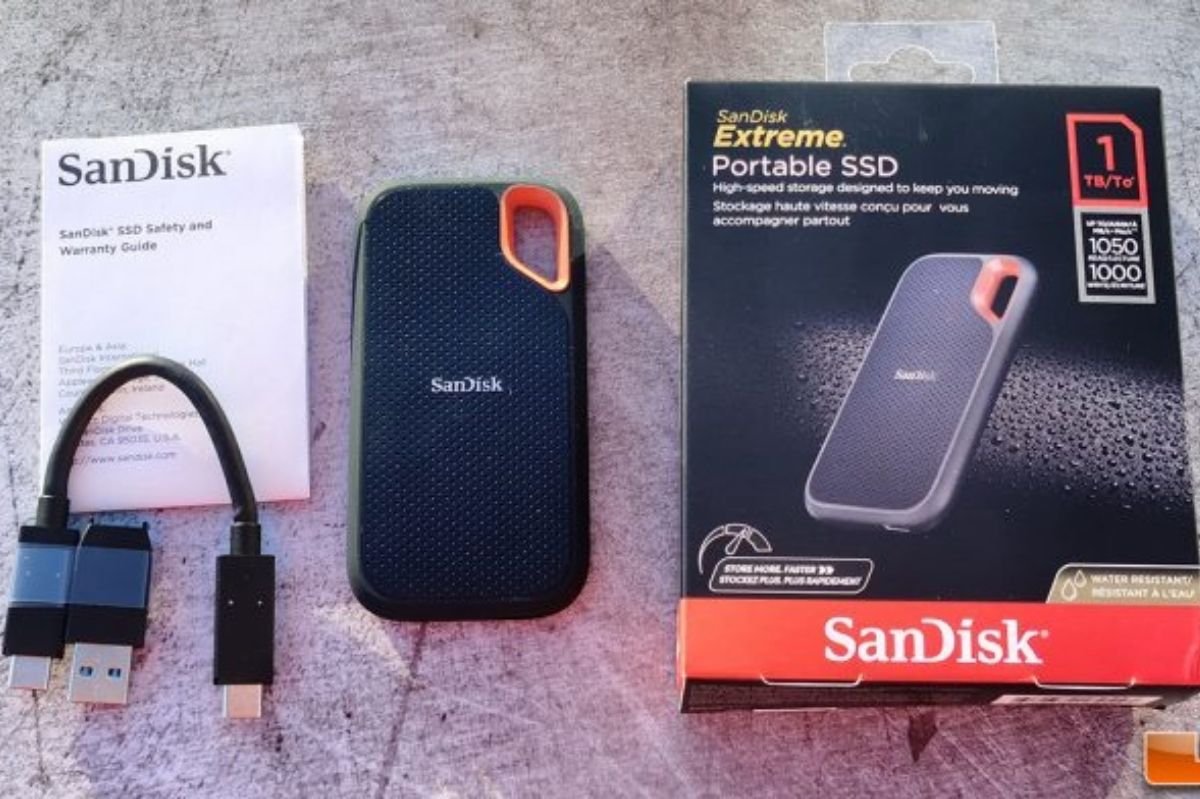 The SanDisk portable SSD is SanDisk’s economic proposal, for those who need a small, portable, and silent product, devoted above all to storage, with some ambitions on virtualization.

With its 9.91 × 46.9 × 96.9mm SanDisk Portable SSD is one of the smallest products in the category of external SSD portable drives, even smaller than the SanDisk Extreme V2 Portable SSD, which is formally the faster sibling, albeit slightly.

Aesthetically it is a unit with a plastic case, mostly empty to the touch (probably the card takes up less space than the external one), whose upper surface is decorated with a series of hollowed-out dots and the logo in slight relief.

In one of the vertices there is a soft red rubber ring, suitable to be hooked somewhere (or to hook, for example, to a keychain) and further down on the same side in a rather unusual position, the USB-C connector 3.2.

The unit is very light, just 40 grams, and the rounded shape makes it an excellent keychain or as a support unit when we are on the move.

The shape has presumably been studied far larger than the actual memory requirement but probably the guys at SanDisk have decided that making it smaller would mean a higher rate of loss.

It Is Used With Mac And Windows

The unit arrives formatted in ExFAT, a filesystem that allows it to be used both on macOS and on Windows, and which from our texts also on other units, has no significant differences compared to the APFS format, typical of internal Mac drives.

The cable supplied in the box is a USB-C / USB-A, which did not fit well with a solid-state drive like this and we opted for a USB-C / USB-C 3.2 cable, as for those with a MacBook Pro the solution is to use such a cable or opt for an external HUB (in the case of other additional connections) such as the economical VAVA Hub 8 in 1 USB-C or the more professional Caldigit SOHO Dock.

Not the highest numbers, but still more than good values ​​for lean storage and use with virtual machines

Also Read : Fast chargers For iPhone And iPad, The Best

From an operational point of view we have used the disk in various ways: as a reservoir for the most important documents (setting aside for the moment the most performing SanDisk Extreme V2 portable SSD ), but also as a support for the various virtual machines of Parallels Desktop 16 (where we have instances of Windows 10, Linux Mint and macOS): in both cases, the operation was good, a sign that the maturity of these technologies has reached more than acceptable levels.

Even in extreme conditions, the disc has its say, such as for the management of a DNG archive with Lightroom, but we are on a very delicate field (because it depends on the type of file) and in this sense, it is obviously recommended to use a Pro unit.

SanDisk portable SSD should be seen as an external drive to be carried around and used on the fly for a quick backup, for data retrieval, and for backing up files that will then go to more capable drives, such as internal disks.

The duality, at least in the form, comes with products like the WD MyPassport Go 2020, which is larger but has the same price and very similar performance.

Family photo: side by side with a SanDisk Extreme V2 portable SSD

In SanDisk’s proposal, the SanDisk portable SSD is the smallest and most affordable external drive, and obviously superior to any mechanical unit on the list, despite having a very attractive access price (less than 90 Euros in the 480 GB version).

It is not an external drive that a photographer or professional video maker can count on, but it can become the best friend for those who use it for classic graphics, for those who need an external drive fast enough for virtual discs, for games, or for a repository of files to be transferred quickly between one computer and another.

Much better than any USB stick on the market today, just a little bit bigger.

The rubber ring is convenient to attach to something, but also to find it in the bag

The connector is in a somewhat unusual position