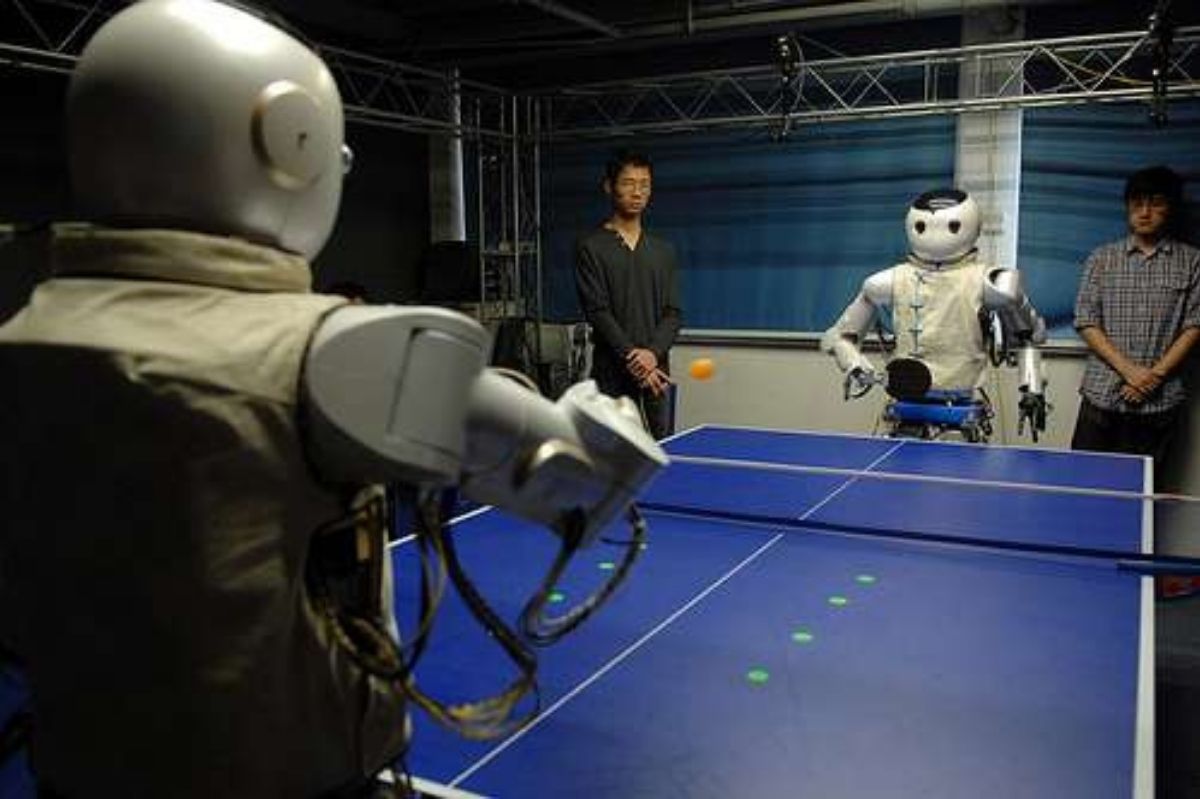 Yesterday’s table tennis women’s singles finals added gold and silver to China in the Tokyo Olympics, demonstrating its national style. I believe that the joy and relaxation on the podium must be the hard work and persistence of the participating teams in training. In ball sports training including table tennis, in addition to the coaches and players we know well, sparring roles are also very special.

On the one hand, they are extremely important, and they are related to every technical improvement of the athletes. On the other hand, they The work is even more boring and arduous, repeated and repeated. However, next, technology can make some changes in the training process of sports events.

Those who know the game industry may have heard of a character named “Luban No. 7” in the national mobile game “Glory of the King”. In the game story, it is not a real person, but a handmade work made by the game character “Master Luban”. This setting is of course very clever because even people who do not play games will agree with this view-human beings have been able to be craftsmen since ancient times, and their most impressive inventions and creations are those that can supplement what humans cannot.

Ability, an artifact that can help humans. In ancient society, these artifacts were Luban’s stone mills, umbrellas, and Zhuge Liang’s wooden cows and horses; in modern society, we have a new tool family whose name is robots.

Through the indoctrination of literary and artistic works such as science fiction movies, most people are no longer unfamiliar with the concept of robots, and even recite the names of characters such as WALL-E. However, if it is specific to the actual combination of robots and life and work, the situation is different, and it seems to be practical. The purpose of the robot is still a distance from the world of ordinary people. The reason is simple.

Every time a new technology appears, it will inevitably be accompanied by some new problems. Just like when we face difficulties, we always spread our hands helplessly. For new problems in the application of robots, the left hand writes “Where to use” and the right-hand writes “How to make”.

The sports industry is perhaps the most unexpected place for robots and humans to cooperate.

The first is the role of robots. Take the Olympic Games, which is the most representative event in the sports industry, for example. The event includes about 300 sports events. Except for horse racing, all other events are completed by people themselves.

Although athletes will use some equipment (such as football), they are just brainless things that are used, and people are the only protagonists of sports activities. What is the role of robots in sports?

The second is the ability of robots. Athletes in sports activities carry the most powerful biological ability of mankind. Whether it is the sharpest visual gaze, the most agile muscle strength, and the most agile coordination, it is just the most common thing on the field. The traditional cognitive level of the machine is considered to have brute force, but the ability of precise control is not enough. No?

Now, in the national sports table tennis event of our country, the “most impossible door” for cooperation between humans and robots is being quietly opened. The brilliance of new robot technology is now shining into the traditional palace of the sports industry. The name of this robot is Pombert-an an anthropomorphic table tennis robot, facing the robot role and ability questions in the sports industry, this robot gives its answer.

The First Question: The Role Of The Robot

Sports events are the perfect spokesperson for “one minute on stage, ten years off stage”. Before a short game, there was long and arduous training behind the scenes. As for playing ball games, table tennis players can hardly train on their own and must need the help of sparring.

It can even be said that there are as many high-level sparring teams as there are athletes. This is because only a comparable level of sparring can target the player to serve and feed the ball, help players familiarize themselves with the opponent’s movements, and shape their own service-receiving skills. Because of this, many national table tennis players have been behind the scenes and have done this meaningful but repetitive work. Obviously, if sparring is a scarce resource for national treasure athletes, let alone ordinary athletes and ordinary table tennis enthusiasts.

Robert’s anthropomorphic table tennis robot has just hit this training pain point in table tennis. It starts from restoring the natural movement of a human athlete to receive and serve the ball, supplemented by parameter settings such as spin level, speed level, and landing position, and realizes the mission of serving as a table tennis training partner. As a robot, it can never tire of training with athletes. As a result, Robert solved the role problem.

The second question: the ability of the robot.

The role problem is solved, and the ability problem should not be underestimated.

The smaller the object, the more difficult it is to manipulate, as is the case with table tennis. Speed, power, rotation, point of impact, and arc are all the winning factors of table tennis. From racket to the table, from hit to friction, there are many parameters that affect the trajectory of table tennis. Taking the rotation of the ball as an example, there are as many as 26 types ranging from one-dimensional, two-dimensional to three-dimensional. Robot sparring must have precise eyesight, quick response, and fine power, and must be comparable to or even surpass humans in terms of “biological” capabilities.

To accomplish this goal, Pangbot Robotics needs the support of two new technologies, one is AI and the other is 5G. AI is the eyes and brain of the robot, ensuring accurate grasp and predictive analysis of the trajectory of the ball. The latter is the neural network of the robot, ensuring real-time internal and external feedback of information, and rapid and timely control of actions. In fact, for all human-robot cooperative robots, these two new technologies are indispensable.

The third new problem: the complexity of technology.

Both 5G and AI are new technologies and are still evolving and developing. For the vast majority of robotics companies, it is self-evident that it is difficult to focus on product development and functional experience on the one hand and to grasp two high and new technologies at the same time.

Facing this third new problem, Pombert’s anthropomorphic robot solved it by standing on the shoulders of a technological ecologist. Inside each Pombert robot, the robot RB5 technology platform provided by Qualcomm is loaded, which provides one-stop support for AI and 5G capabilities, so that the robot has an intelligent brain and excellent vision.

Just as the intelligent development of natural life is inseparable from the natural evolution of the eyes, vision is also the first for robots.

In computer vision, Pombert has achieved 2 billion pixels per second graphics processing speed and extremely high-resolution image capture and other visual capabilities through the built-in eyes of the Qualcomm RB5 platform; in terms of brain information processing, RB5 is equipped with a heterogeneous computing chip. Its fifth-generation Qualcomm AI engine can achieve an AI performance of 15 trillion operations per second (15 TOPS). In terms of signal transmission, the RB5 platform provides 5G support, which is also the first to support 5G at the same time. And AI robot platform. With such an enabling platform, the robot’s 5G+AI low-level capability output is concentrated on a fist-sized RB5 system. Therefore, the question of how to make a good robot has a mature answer here.

Although the scene innovation of Pangbot’s anthropomorphic robots began in table tennis and sports, the cooperation opportunities between robots and humans will obviously far exceed the scope of the table. It will not only enter the field where sports and humanities complement each other but also in more industries. Reproduce the effect of innovation.

In sports, through the empowerment of 5G+AI technology, sports events will derive new experiences. For example, with the increasing popularity of edge computing and mobile computing, the sports robots participating in the training, the tablet computer in the hands of the coach, the AR glasses worn by the audience, the smart racket used by the players, and other IoT devices can be combined into a higher level “robot” The system, from the competition to the watching, from the arena to the outside, the entire sports ecology will be intelligent.

Meng Pu, chairman of Qualcomm’s China region, said at the 50th anniversary of China-US table tennis diplomacy that Pangbert’s anthropomorphic table tennis robot is not only a technical product integrating 5G and AI but also international cooperation and cross-border collaboration. Crystallization will work with partners to contribute to the humanities and sports exchanges empowered by science and technology.

On March 25 this year, 28 departments including the National Development and Reform Commission and the Central Cyberspace Administration jointly issued the “Implementation Plan for Accelerating the Cultivation of New Consumption”. The work led by the State Sports General Administration emphasized the development of smart sports and the promotion of smart sports facilities. The construction of globalization and informatization, and the use of new technologies such as 5G to empower sports events.

Outside of sports, Pombert’s enlightenment is that everything originally required human eyesight and brainpower to complete, but the process is full of repetitive and boring scenes, which are spaces where robots can play a role. We will thus have more confidence in autonomous driving because driving requires eyesight and brainpower, but most of the driving process is boring.

Qualcomm CEO Anmeng predicted at a “redefining the car” conference: In the future, every car will be connected to the Internet. If we truly realize the intelligent integration of tens of thousands of vehicles, thousands of roads, and hundreds of cities through 5G and C-V2X (vehicle connected everything) into a transportation robot system, then human time and energy will commute in the city. In the process, what degree of release was obtained? Its value must be infinite.

40 years ago, “Father of the Modern Olympic Games” Coubertin published the classic “Ode to Sports”. He wrote that sports are progress, for the sake of the rapid changes of mankind… 40 years later, new technology is making modern sports itself. It has a new look, and reproduces a wonderful moment in more industry arenas, creating more changes with each passing day.

Also Read : The Future Depends On The Data: How Does Clubhouse Build TikTok-Style Algorithms?